What To Do
About District Two? 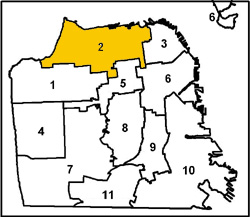 We're making good progress on our project of trying to have played a show in every supervisorial district in San Francisco by the end of 2007.

However, I'm concerned about District 2.

District 2 contains the affluent neighborhoods of Sea Cliff, Pacific Heights, and the Marina. It is not a district that contains a lot of venues for live original music.

At PFSH HQ, we've been brainstorming about places to play in District 2. Here's what we've come up with so far:If you have some other ideas for appropriate District 2 venues, please send them our way--especially if it's something that might actually pan out! (Use the comments feature below or the Contact Us link on the right there.)

What about that club that's on Van Ness and Union (I think)? It used to be called Mick's Lounge. I think it's now called the Up Down or something like that.