Malcolm X vs. The Gambling Poet 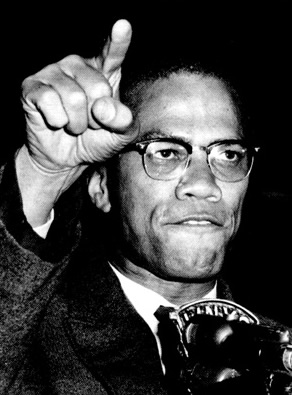 The Autobiography of Malcolm X describes how Malcolm X won a large pot in a game of stud poker:

A hustler, broke, needs a stake. Some nights when Shorty was playing, I would take whatever Sophia had been able to get for me, and I'd try to run it up into something, playing stud poker at John Hughes' [sic] gambling house.

John, one night, was playing in a game I was in. After the first two cards were dealt around the table, I had an ace showing. I looked beneath it at my hole card; another ace--a pair, back-to-back.

My ace showing made it my turn to bet.

But I didn't rush. I sat there and studied.

Finally, I knocked my knuckles on the table, passing, leaving the betting to the next man. My action implied that beneath my ace was some "nothing" card that I didn't care to risk my money on.

The player sitting next to me took the bait. He bet pretty heavily. And the next man raised him. Possibly each of them had small pairs. Maybe they just wanted to scare me out before I drew another ace. Finally, the bet reached John, who had a queen showing; he raised everybody.

Now there was no telling what John had. John truly was a clever gambler. He could gamble as well as anybody I had gambled with in New York.

So the bet came back to me. It was going to cost me a lot of money to call all the raises. Some of them obviously had good cards but I knew I had every one of them beat. But again I studied, and studied; I pretended perplexity. And finally I put in my money, calling the bets.

The same betting pattern went on, with each new card, right around to the last card. And when that last card went around, I hit another ace in sight. Three aces. And John hit another queen in sight.

He bet a pile. Now, everyone else studied a long time--and, one by one, all folded their hands. Except me. All I could do was put what I had left on the table.

If I'd had the money, I could have raised five hundred dollars or more, and he'd have had to call me. John couldn't have gone the rest of his life wondering if I had bluffed him out of a pot that big.

I showed my hole card ace; John had three queens. As I hauled in the pot, something over five hundred dollars--my first real stake in Boston--John got up from the table. He'd quit. He told his house man, "Anytime Red comes in here and wants anything, let him have it." He said, "I've never seen a young man play his hole card like he played."

Sounds to me like Malcolm got lucky. Set of aces vs. set of queens. His check was correct but not neccessarily brilliant. Any bet with an ace showing like that where any other player is not paired is going to fold if he bets. He is out of position, first to act so he doesn't know that the other players had strong hands, so his check is good and not really imaginative. One could argue that a bet would have looked like a bluff and might get called or raised with the strong hands, so a bet might even be a better, more imaginative play. It might have encouraged even more action. Malcolm's brilliance was in his opponent having a strong, but not strong enough, hand.

If I ever find The Gambling Poet waxing eloquent about the Black Revolution, I'll be sure to run his words by an NAACP official for comment.

thank god the gambling poet is back in the saddle...i STRONGLY endorse a triumphant return of Gambling P...give me gp's corner...now!!!!!!!!